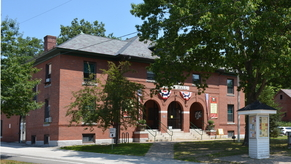 The Chandler Reservation is an elected committee that oversees the management of the Reservation. Management activities include forestry, recreation and wildlife. A trail system has been developed which offers great hiking opportunities. A self-guided woods-walk trail has 19 "stations" showing points of interest.

The Chandler Reservation, land owned by the Town of Warner, currently consists of approximately 1524 acres. Topography is generally steep, with a high percentage of the land in excess of 25% slope. The land includes the summits of the Mink Hills, the highest elevation being at 1,650' above sea level. A son of U.S. Senator William E. Chandler gave the original tract of about 800 acres to the Town in 1919. Other parcels have been added to the Reservation in subsequent years. The property is separate from, but adjacent to, the 400 acre Harriman Chandler State Forest. The property was surveyed in 1980 and the boundary lines are kept blazed and painted (orange). Oversight of the forest management has been accomplished through the Chandler Reservation Committee, established in 1928, a board whose members are elected to their positions for a four year term. See current annual town reports for the membership roster or look in the Town Officials document.

In the 1930's, the Civilian Conservation Corp was involved in creating several plantations as well as establishing some of the trails in use today. Also during the 1930's, pulpwood was "harvested in great quantities" to serve Warner's chemical plant.

Other logging has occurred over the decades; evidence of this in the form of stumps is readily apparent in most areas of the Reservation. These stumps date back to the late 1910's and up to the late 1990's.

Comments and questions should be addressed to the Committee in care of the Warner Select Board.